I’ve confessed in previous posts that, when it comes to the larger models in my collection, I tend to develop a kind of ‘painter’s anxiety’ and either not apply paint to them or do so at a spectacularly snail-like pace. As a result I’m sure most of you who saw this post about my work-in-progress Nurgle-infested Helbrute probably didn’t expect to see the finished piece within our lifetimes. However sometimes I’ll surprise you (or if not you then at least me) by accelerating and actually getting on with things. Being rather pleased with this Helbrute I decided to strike whilst the iron was hot rather than leaving him to languish like his Khornate battle-brother. Take a look: 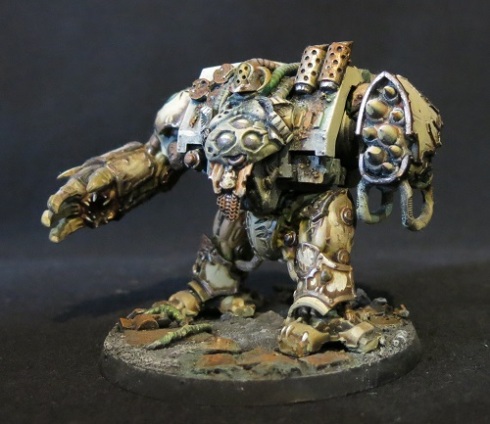 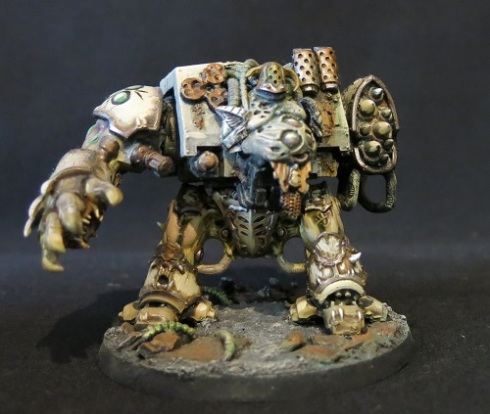 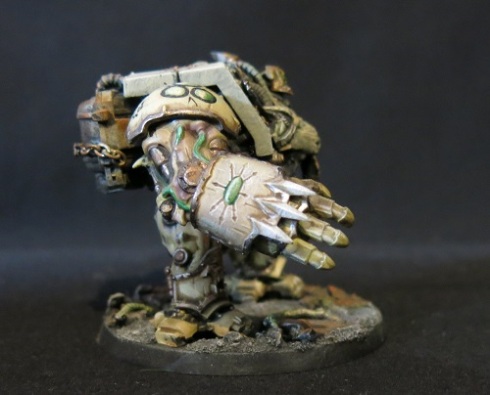 I took the chance to practice my freehand with the symbol of Nurgle on his shoulder (in case there was any doubt as to who he serves) and a few chaotic sigils further back. 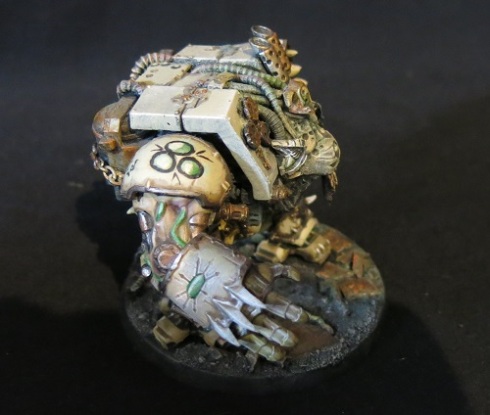 Here’s a couple of shots of the rear of the model. As seems to be becoming a theme I couldn’t resist adding some big, grotty tanks of toxic sludge (although for once I didn’t have them open to the air – denying me the chance to paint more lurid green slime). 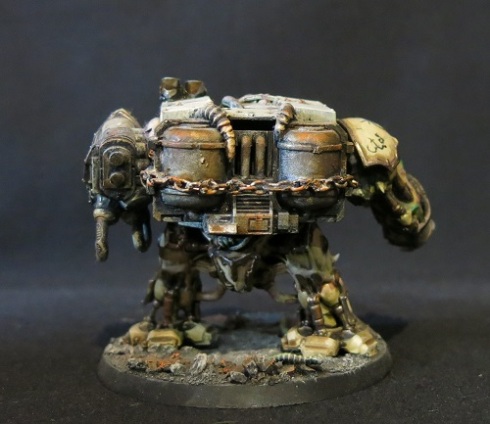 I also like to come up with a little bit of background to accompany each character or squad in my collection but often I don’t actually write it down, beyond a quick note of the name and major details. However on this occasion I actually put together something I thought was worth sharing:

Amongst the legions of traitor astartes interment in a dreadnaught is not an honour but a curse to be feared and shunned. It is rare indeed that one would choose it willingly yet the one known as Igorin Rotbringer is such a rarity. Cut down by the guns of the Kadatheron Seventh Guard he was dragged to safety by his battle-brothers amongst Golothess’s squad, a half-forgotten warrior-code compelling their actions. The plague acolytes prepared to sacrifice their crippled squadmate, atomising his flesh and pumping it into the atmosphere of the world they besieged so that even in death he might continue to spread his contagions. The wounded Igorin, however, begged for another path to be chosen. Such was his dedication to the God of Life and Death that he would accept the agony of dreadnaught imprisonment in exchange for continuing to spread Nurgle’s plagues beneath Ghisguth’s banner. Chilled and horrified by his declaration his battle-brothers still knew better than the question what they saw as a manifestation of the Dark Will. They did as Igorin asked and in the wake of his rebirth the Kadatheron Seventh Guard were the first to be blessed…

…And yes, this does mean I’m planning some plague zombies!

16 responses to “I Am Disease”