Look at almost any piece of artwork showing the Imperium at war and there they are, striding along in the background, towering over the tanks and scurrying foot soldiers; the Titans. They’ve been part of 40k for such a very long time, yet for most of us they’ve been out of reach, the preserve only of those rich enough to afford the Forgeworld kits or spectacularly talented and able to build our own. My fingers were crossed from the moment I saw the Riptide, then the Wraithknight came along and sealed the deal. Surely, surely an opportunity was not to be missed? The Imperial Knight must, at last, be on its way!

Thankfully when it did emerge the Knight did not disappoint. Hard to believe really that it was a year ago now. As soon as I saw it I wanted one, I just wasn’t sure if I could actually make a decent job of painting it. After all I’d never attempted anything even a fraction of the size, and as I’ve noted before I can be a bit of a coward when it comes to the bigger kits and this beast is one of the biggest of them all. Finally there’s the fact that I wanted to do some fairly major conversion work to it. Much as I love the heroic knights who stride out in defence of the Imperium I’m an unrepentant traitor at heart and I wanted something far darker and spikier than the official kit. My imagination had set the bar pretty high and I admit I was a little afraid that my skills might not match it. By September last year I’d finished one leg. Yes that was a long time ago wasn’t it, thanks for reminding me. Not to do it down, I’m pretty pleased with that leg, but I’d be the first to admit there was a way to go yet. Well, it’s taken a little while but here’s progress at last – a whole other leg, and a banner to go with it. 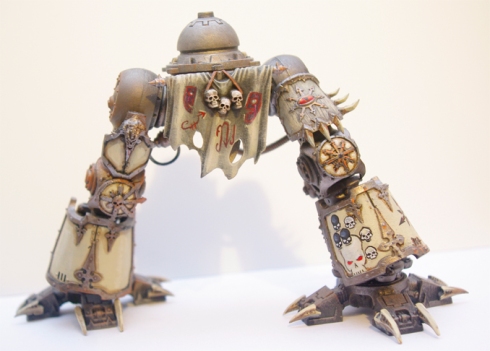 Here’s a close up of the banner. 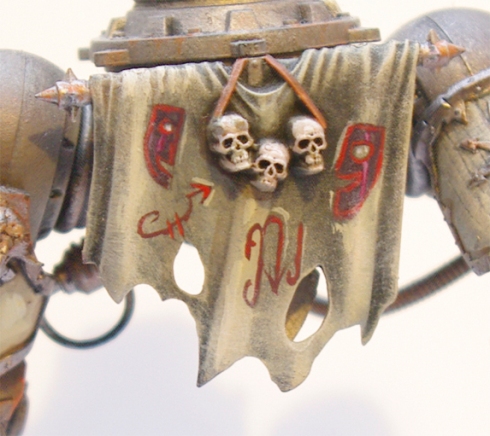 With the legs done I’m ready to start on the torso and head. This is where my ambition might outstrip my ability as I’ve got some fairly grand and convoluted plans in mind. Updates might, therefore, remain a bit thin on the ground – this was never going to be a project I finished fast and if I’m to pull off what I’m looking for the learning curve will be quite steep. Never mind, I’ll give it my best shot and let’s see what we end up with!

9 responses to “One Knight Stand”