If the Boyz Wanna Fight (You Better Let ‘em)

I don’t usually make vows, promises, threats or grand claims about my hobby, and I certainly try to avoid deadlines. This is for fun after all, I have enough of that at work. However, way back at the start of the year I decided to dust off my old Orks and freshen them up a bit; tone down some of the more garish paintwork, fix some of those early conversions to which time has not been kind, sort out unfinished bases and so on. I then did pretty close to nothing about it until the new Orks were released back in June, spurring me into a flurry of activity. Since then I’ve carried on in fits and starts and now, with the year drawing to a close, I’d really like to see this project done. If nothing else I made myself a promise that I wouldn’t start buying new Orks until I’d finished sorting out the ones I already owned (a promise I broke almost straight away – with justification – hopefully more on that in the next week or so).

Anyway, so you can all laugh at me when I fail to come close to achieving this goal, here’s what I’m aiming for at the moment. Not including the boys I’ll show you in a moment I’m aiming to finish off; 1 Truck, 2 Pain Boys, 1 Warboss, 1 Big Mek, some Nobs (can’t remember how many at the moment), 3 Deffcopters, 4 Lootas, 6 Burna Boys, 5 Stormboys and maybe a Weirdboy. I’m not really setting myself a deadline but if I can get these bad boys in the bag by New Year(-ish) I’ll be pretty happy. As I’ve got quite a lot of other things on between now and then it may very well not happen so I’ll not be pushing myself too hard. Anyway, here’s a look at what I’ve managed so far. First off, a whole load of boys.

This Evil Suns boy has had his bike nicked (again). Not to worry, those nice Death Skull lads have one just like it, only in blue, and they’re offering it to him for a knockdown price. Bargain! 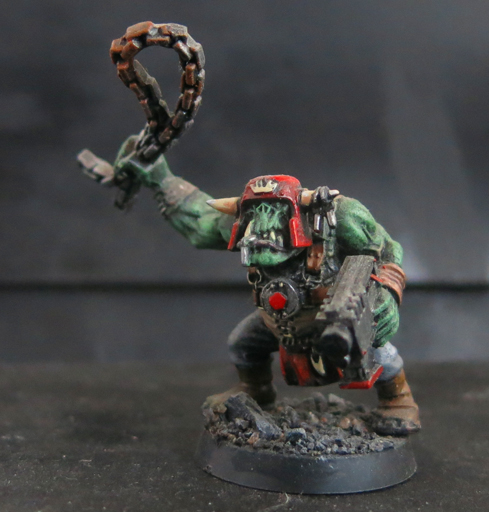 Maybe it’s just because I’ve been painting Orks and listening to death metal at the same time so much lately but I can’t help but notice that the lyric “Waaaarrgh!” seems to come up a lot. Who knew those guys were so keen on Orks? 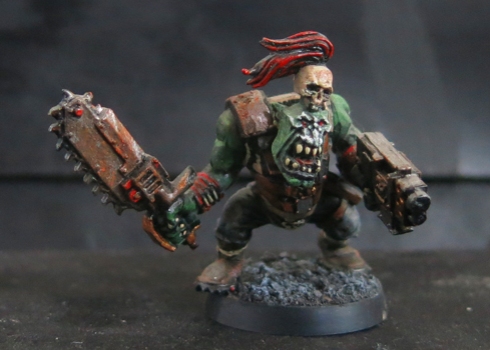 This boy would appear to actually be aiming his slugga. He must be new. That’s not how things are done around here at all! 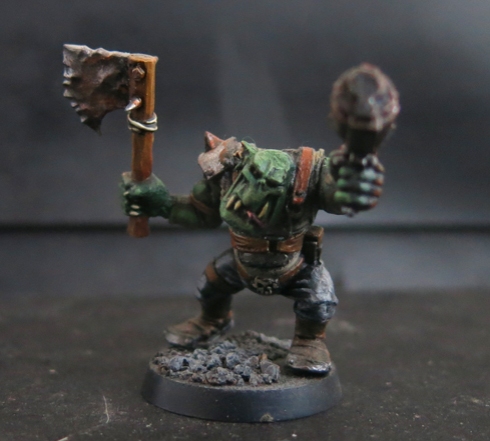 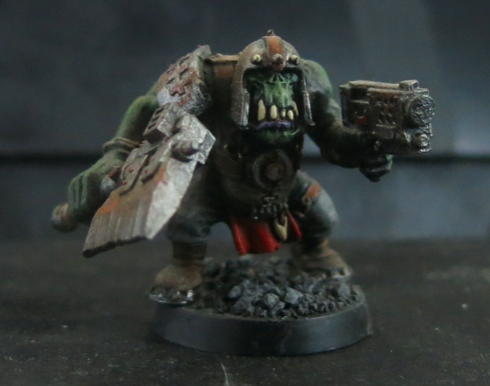 The last few I worked on were the ones that needed the most effort, having powered through the easier ones earlier on I now had to get down to dealing with those that needed head or weapons swaps.

As I finished off the squad I realised there was a missing element – a Nob to lead them (or at least hit them enough that they stopped messing about fighting each other and actually had a go at the enemy). There are already plenty of plastic Nobs in my army (more on them in a later post) so obviously I could just move one of them sideways into a new role. However they’re all pretty massive when compared with the boys and as a result didn’t look like a cohesive part of the squad. Instead I decided to build a new, slightly more subtle, Nob out of plastic bits that I had kicking around. As I worked on him I realised he is the first Ork I’ve painted from scratch in almost four years. 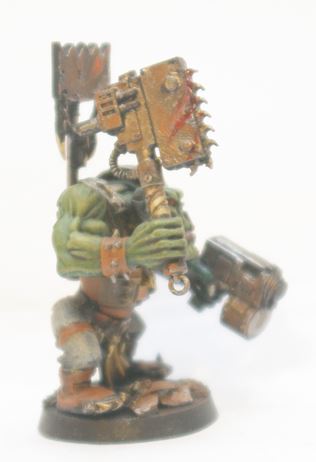 Overall I’m really pleased with how he came out, the paint job is deliberately dirty but then if you want nice clean colours then go and mess about with those pointy-eared pansy Eldar gits – an Ork is too busy fighting to do his laundry!

Emboldened by painting the Boss Nob I rattled through this guy in fairly short order as well, especially as he’d been cluttering up my painting desk for a very long time indeed. (To be fair, he had been undercoated. Isn’t that what they mean by Black Orcs? Boom boom…).

He’ll be the first of a squad of ‘Ard Boys based off the Black Orc bodies (a fairly common conversion but if it ain’t broke…). I want to finish off everything that’s already in progress though before I start on them. Fingers crossed as the End Times keep rolling in Warhammer we might see some new Orc models (can’t see the boys missing out on a big fight like this) giving us Ork fans another opportunity to get lootin’.

Like Loading...
This entry was posted on Wednesday, November 12th, 2014 at 11:04 am and tagged with 40k, Boss-Nob, Conversions, Games Workshop, Hobby, Miniatures, Ork, WAAAARGH!!, Wargaming, Warhammer 40 000, Warhammer 40000, Warhammer 40k and posted in Orks. You can follow any responses to this entry through the RSS 2.0 feed.
« Long Live New Flesh
Like A Surgeon »