The Thing That Should Not Tree

In concept I think the Beasts of Nurgle are great; lolloping, toxic slugs with the minds of boisterous puppies, unwittingly poisoning each new potential playmate before bounding joyfully on to the next. So long as you don’t let them up on the couch they make for great family pets, albeit only briefly.
The miniature however doesn’t really grab me so I needed to come up with something to use as an alternative.
The Index Chaotica Garden of Nurgle book describes a group of Eldar Seers from Craftworld Lugganath who attempted to rescue their goddess Isha from Nurgle’s realm but instead became trapped and transformed into a copse of sickly trees. The idea took root (pun most definitely intended) and I decided to create my own grove of pestilent possessed trees, haunted by malevolent spirits and crawling forth from the garden and into the world of the living.
Here’s the result of my first attempt. Overall, although there’s things I’ve learned for next time, I’m pretty pleased with it. 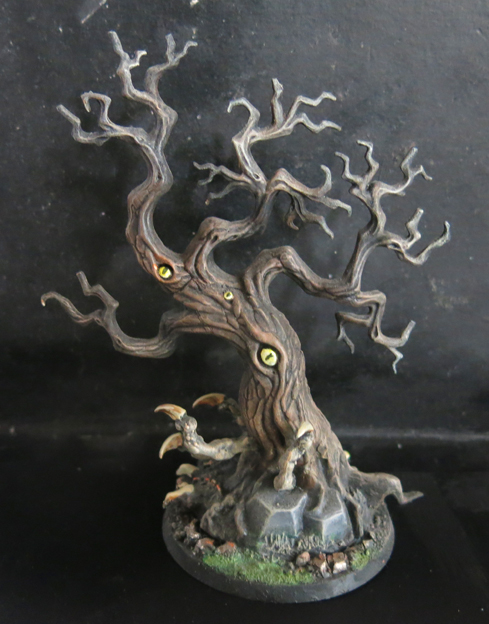 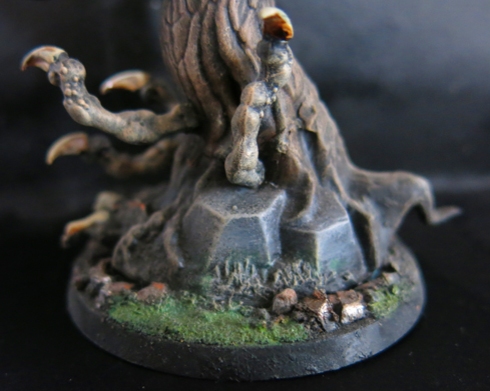 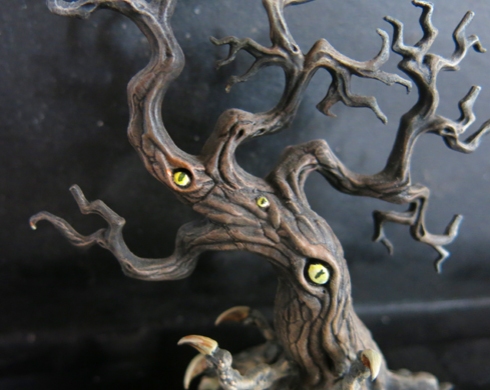 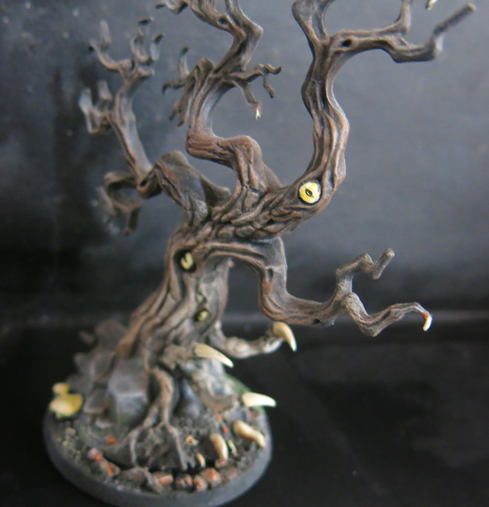 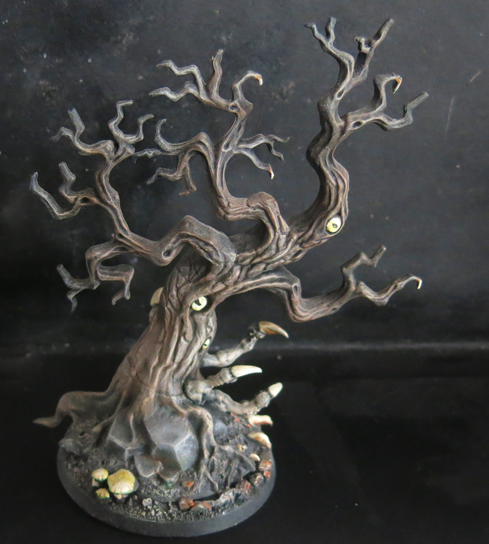 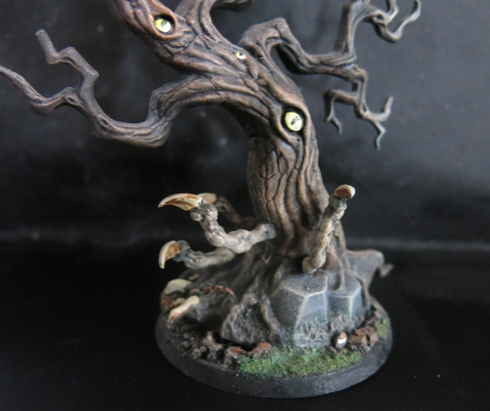 I added some toxic looking mushrooms to the base with a little leftover greenstuff. 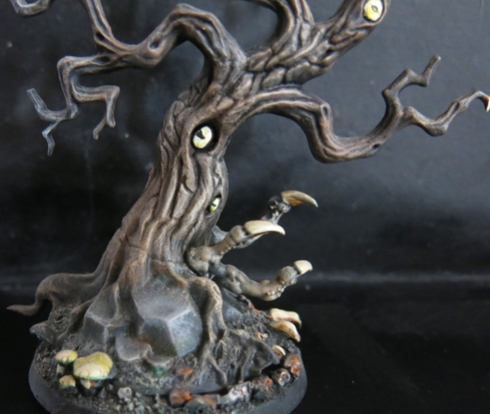 The eyes were made by rolling up balls of greenstuff and stuffing them into the boles (intended to be the sockets by which extra branches are added). 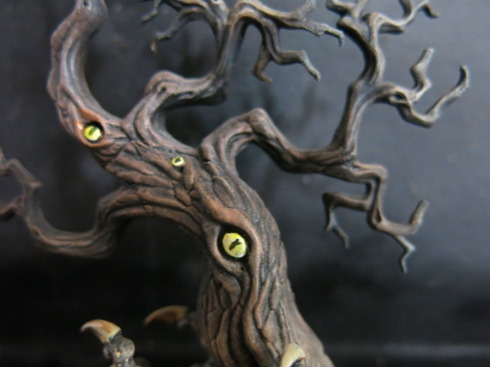 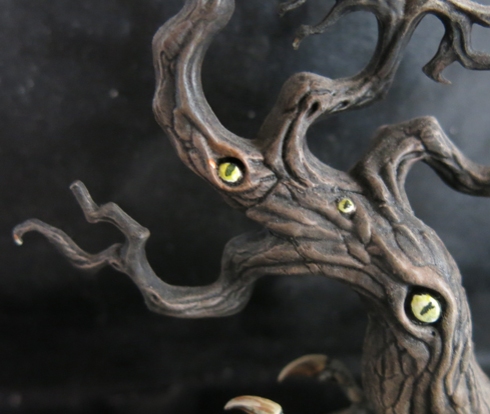 Whilst we’re on the subject of Nurgle this week sees the release of the Maggoth Lords, a huge and impressive kit that has fans of the Plague God falling over themselves with excitement. (As an aside I’ve not really noticed anyone online saying “OMG! This kit is so lame LOL no-one will buy it!!one!!” which is a sure sign of its quality as usually there’s someone out there wants to have a go). Obviously there’s plenty of people with Warriors of Chaos armies for Warhammer who’re over the moon right now – but what about the likes of me? How do I combine my overwhelming avarice and desire to purchase this kit with my flimsy self-control and determination not to start a collection of fantasy Nurgle-worshipping warriors? How do I instead launch this beast into the 41st Millenium and set it loose on the dying Imperium of Man?

Obviously the biggest part of this must be finding a use for the Pox Maggoth itself. A lot of people have suggested turning it into a Great Unclean One (possibly by giving it a plague sword – the rusty blade from the Soul Grinder kit would be perfect). Although I like this option (and I want a decent looking Great Unclean One) I prefer the image of Nurgle’s greater daemons as being slightly more human – a biped rather than a quadruped – and so although I look forward to seeing other conversions based on this idea I probably won’t pursue it myself (plus I want to see if there’s anything still to come for Nurgle in the End Times before I investigate Nurgle’s greater daemons further).

A second option would be to turn it in into a giant chaos spawn or, better yet, a Spined Chaos Beast with the mark of Nurgle. At the moment this is my favoured option.

Thirdly, one could build a huge platform out of rotting wood and rusty metal and mount it on the beast’s back. Attach a suitable turret and assorted ordinance and crew and call it a tank.

A forth, and for me fairly unlikely option as my Skaven army is currently very much on the back burner, but it’s worth noting that these beasts could also be turned into some amazing Clan Pestilens monsters (why trade with treacherous Clan Moulder when you can breed your own Hell Pit Abominations – it is the End Times after all).

Side-tracking slightly, but it worth commenting that releases like this only make the need for new greater daemons more obvious. Whilst there are other daemons out there of similarly low quality (Fiends of Slaanesh I’m looking at you here), the greater daemons are supposed to be the generals of the gods, Lords/Warlords in the games and centrepieces to any collection. The more high quality miniatures like this are produced however the more they are outshone by the ranks of their followers. The problem is exacerbated by the fact that suitable proxies are hard to find within the Games Workshop range. I’ve seen giants turned into Great Unclean Ones with a lot of greenstuff, and the beastmen Ghorgon can form the basis of a cracking Bloodthirster. As usual however Slaanesh and Tzeentch are at the back of the pack (that Keeper of Secrets is just rubbish isn’t it?) and there’s not a lot out there to easily change that.

Anyway, having determined a purpose for the Maggoth in my collection, could I find a use for the three riders? Morbidex (the only one with a cool name) is very much a Herald of Nurgle and should I decide to buy this kit I’d probably mount him as is on a palanquin (or possibly just a heap of Nurglings to carry his rancid bulk around). The other two would need a little more conversion, Orghotts into a Chaos Lord (he reminds me somewhat of the Chaos Lord pictured on page 31 of the Chaos Codex) and Bloab into a Sorcerer (although that stream of flies and maggots trailing from his head doesn’t really work for me so that would be snipped off without further ado). Finding suitable legs would be the main issue but I’m hoping – it’s hard to tell as yet – that they’d match size-for-size fairly well with the Blightkings.

Anyway, for the moment all this remains purely theoretical, but I’m certainly looking forward to seeing what others come up with – chaos players being, for my money, some of the best converters out there. Let’s see how long I manage to contain my avarice before plunging in to join them.