With Nurgle being the hot-topic of the moment this week I found myself infected with enthusiasm (see what I did there…? Yeah, you loved it really) and decided to build this Plague Marine. It was a fairly quick conversion built using mostly Chaos Marine parts, with the Nurgle head from the Warhammer Chaos Chariot and the legs from the Avatars of War Corruptors of the Apocalypse. It only took me a few hours to build and paint him but I’m rather pleased with the results.

Quite by accident the Corruptor legs make him slightly taller than his squadmates, although not so much that he looks completely out of place.

As another example here he is towering over a newly finished cultist (more on them soon I hope). Now that’s how a Space Marine should look when standing next to a mere human (yes, I know the cultist is running, it makes him a little shorter. Never mind eh?).

The reason for this surge of enthusiasm for the plague god is that someone clever over at Games Workshop just came up with a way to sell the well-loved Nurgle Chaos Lord by the box. The result is Gutrot Spume and the Putrid Blightkings (a winning name for a teenage grindcore band if ever there was one). Obviously this is exciting news for fans of Chaos in Warhammer but what about those of us fighting the long war in the far future? The good news is that with such a profusion of heads and weapons (a whopping 17 heads and 21 weapon arms) there’s enough to add a Nurgly touch wherever it’s required. Off the top of my head I’m already considering using the extras from the Blightkings for all kinds of Nurgle worshipping characters, ranging from Sorcerers and Dark Apostles up to a Daemon Prince.

As for the models as a whole my first thoughts ran along the lines of Plague Ogrens or Nurgle Obliterators although on a second glance I think they’re far too small to serve as the base models for these hulking brutes. Having said that I like the image of a Blightking with a reaper auto-cannon strapped to one arm, mowing down ranks of Imperial infantry with a throaty chuckle (yes – I’m aware that this says nothing good about my mental health!). Another possibility, and one which serves to balance out the size issue, would be to have one or two Blightkings wired or grafted into a motile, semi-sentient weapons platform. Alternatively a fairly simple possibility would be to turn them into Nurgle Possessed by adding Chaos Marine backpacks and other sundries.

Some might think I’m getting rather over-excited about these, or buying too heavily into the marketing, but I reckon as an introduction to the Chaos wave of the End Times this has been fantastic. Even the name “Blightkings” sounds cool (not so true in the case of “Gutrot Spume” but we can’t have it all) and the lashing tongue erupting from one of the stomachs is pure old-school chaos! Even if there’s nothing else to come, or it’s all awful, I’ll still be fairly happy. It may well be that these will be criticised for the cartoon-like, over-the-top nature of their mutations but to my eye it works well here (Nurgle being the one Chaos God where too much realism isn’t always a good thing). 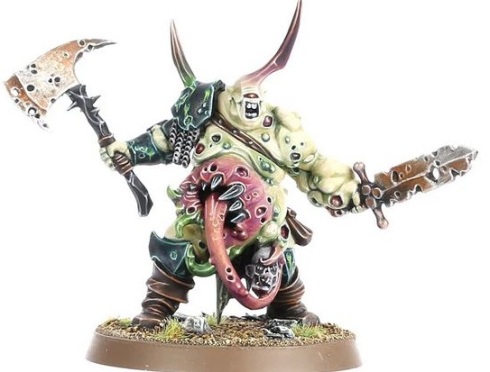 Whilst the strength of the Blightkings is the ability to covert and customise to your heart’s content Gutrot Spume looks to be a trickier proposition. Whilst the generic Nurgle chaos lord has been converted by pretty much everyone in the world (including myself) Gutrot is likely to be a lot more limited in this regard, the lashing tentacles and kraken mouth hidden in his armpit acting as a significant barrier to simple conversions. No doubt it’s a spectacular model though and, with a little tweaking, could make a smashing Nurgle Lord for a Chaos Marines warband, or perhaps a Herald of Nurgle. If you don’t want the tentacles however you’re either in for a lot of work or you need to look elsewhere so I suspect that many of the conversions based off this model may end up being rather similar. 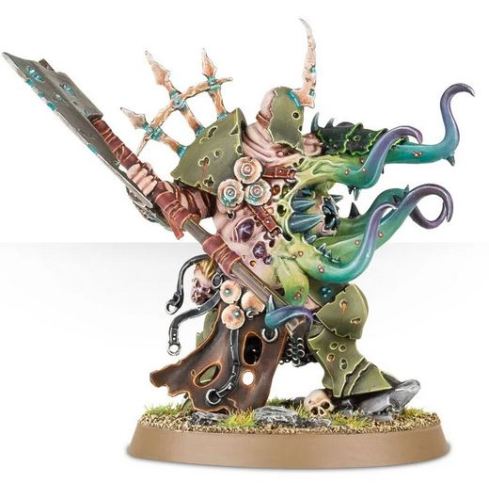 This release also means that Chaos Marine fans are now well served with Warrior’s of Chaos kits to loot for two of the gods. Nurgle has the Blightkings whilst Khorne has the treasure trove that is the Skullcrushers. Slaanesh and Tzeentch however remain a little undeveloped. Slaanesh at least has the Hellstriders although their slight forms don’t offer a lot for a Chaos Marine fan to get to grips with (mind you, there’s mileage there for Traitor Guard). Poor old Tzeentch however is languishing at the back of the pack. His daemons are fairly solid (give or take the Pink Horrors which I can’t claim to love) but his mortal followers are distinctly lacking. Unfortunately Forgeworld, in spite of producing some cracking kits for Khorne and Nurgle have so far offered Tzeentch and Slaanesh little in the way of support. Still the End Times are but young yet, so who knows what’s on the cards for the weeks to come?

Anyway, what are your thoughts? Have I bought into the hype? Do you have any great conversion ideas you’d like to share? If so, as always, the comments box below is the place to do it.
Cheers!

5 responses to “Cult of Decay”