Back in June when I reviewed the new plastic Meganobs I said that the first Warhammer 40k miniature I ever painted was one of the old metal Meganobs but I couldn’t find him to upload a picture. Well, rummaging around at the back of the shelf, where older and less well painted/converted miniatures are slowly pushed back to linger in dusty shame, I spotted him. And you know what? I still love him. My painting may have improved a little since then, and the new Meganobs may be bigger and meaner than their elderly (and heavy) metal counterparts but he’s still as tough and angry as ever.

I admit I was a little torn between leaving him alone as a sort of historic artefact and touching his paint up a little so that he was no longer left behind by the march of progress. In the end I compromised. Somewhere along the line he must have come off worst in a fight (unthinkable I know) – the stick bomb launcher on his arm had fallen off and his metal gob was shaking around like a loose tooth so he needed some kind of TLC. As I was doing this anyway I decided to put him on a new base as well.

Anyway, here he is, ready to show those plastic whipper-snappers a thing or two. 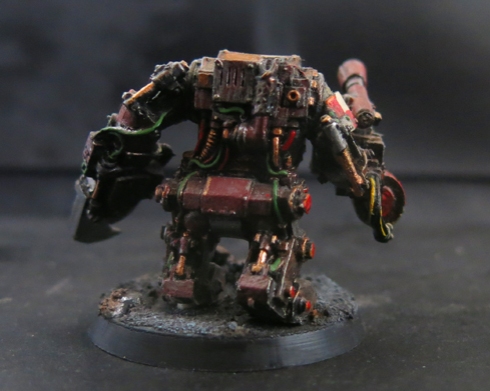 Like Loading...
This entry was posted on Thursday, September 11th, 2014 at 6:06 pm and tagged with 40k, Game, Games Workshop, Hobby, Mega Nob, Miniatures, Ork, WAAAARGH!!, Wargaming, Warhammer 40 000, Warhammer 40000, Warhammer 40k and posted in Orks. You can follow any responses to this entry through the RSS 2.0 feed.
« Best Foot Forwards
Weedy Little Gits »