A few weeks ago I said I’d been inspired by the release of the new Helbrute kit to return to my old Chaos Dreadnaught (as they were called back when he was built) and give him a touch of paint to bring him up to a standard matching the rest of the collection.
Here’s the original version, pre-restoration. If I’m honest my enthusiasm waned whilst I was working on this the first time and it was a real struggle to get him finished to a stage where I was content to put him on the shelf.

And here he is post-restoration. Hopefully you’ll agree he’s a rustier, nastier beast, and the failed attempts at greenstuff on the knee have been swept aside. 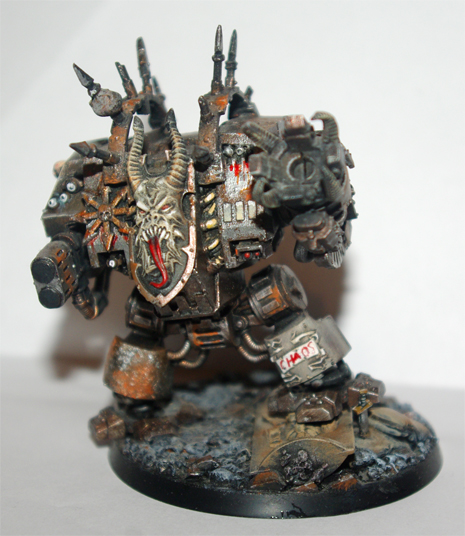 Something that jumps out from both the new Helbrute kit and the Dark Vengeance version is the face. As soon as you look at them you know that beneath all that hulking flesh and iron is a human being, albeit a superhuman twisted and tormented by their incarceration within the warp. Back when I made this miniature however these weren’t available. Converting a Chaos Dreadnaught from its loyalist counterpart often meant simply creating a standard Dreadnaught with spikes all over it. Inspiration came in the form of the Fantasy Chaos Knights shield which I used to make the monster’s face. Rather than a space marine, I reasoned, this Dreadnaught was piloted by a daemon which had been lured into the machine and caged there. 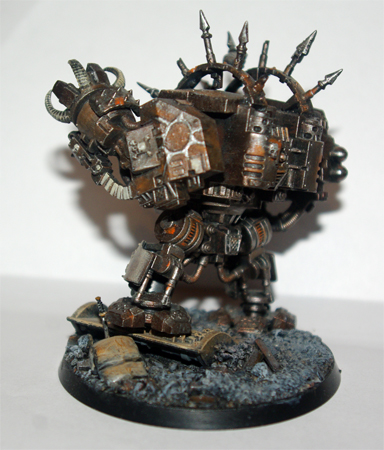 Working on him again got me quite inspired about Helbrutes, so much so that I’ve finally assembled my Dark Vengeance Helbrute as well. Of course as soon as I’d done this it became spectacularly obvious that both miniatures share the same pose, my conversion crushing a fallen Imperial icon with his left foot and firing with the gun on his right arm. All I can say is “I thought of it first”.

The image above was included to illustrate my point – my apologies to anyone else who saw Helbrute’s line-dancing; the horror and trauma was not intended.

One response to “Cursed Be Iron”